If you know anything about me, you will know I like to research and discover things about my ancestors.  I do because, until a few years ago, I did not know all that much about them.  Either side of the family was pretty much a mystery except for the O’Connells. For me, the O’Connells were my maternal grandmother, Regina, and her brothers Edward and James.  Edward was her twin and James was my godfather.

I have spent a lot of time looking through sites like Ancestry.com, FindaGrave.com, and Newspapers.com  for names and dates of family events. I have also researched the family homes in Brooklyn. This week I plugged in an address to see what would turn up. The house at 164 Dean Street is in the Boerum Hill section of Brooklyn.  During my lifetime it was “Uncle Ed’s house.”

It was common for multiple family units in the Irish immigrant community to fill these venerable old Brownstones. From 1907 through the late 1980’s, 164 Dean Street was the home of many of the Irish names that run in my family; Boyle, Cooke, Mahoney, and O’Connell.

I went into Newspapers.com and found The Brooklyn Daily Eagle, the daily paper for Brooklyn for 114 years from 1841 to 1955.  What I found was a little bit of a revelation.  I caught some of my ancestors living their daily lives.  The first thing to catch my eye with the Dean Street address was a letter written by my, then 10-year-old, grandmother to the children’s page published in May 1917 seeking admission to the Humane Club.  It seems to have been a column written by someone who went by “Aunt Jean.” 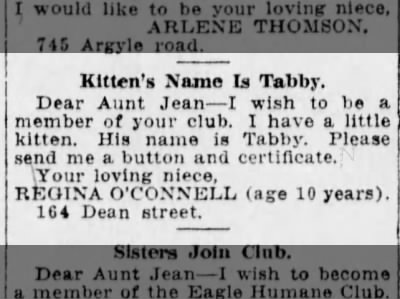 The newspaper did a lot of society reporting, and it actually reported on parties on Dean Street.  Mary Boyle Cooke (my second great-grandmother) celebrated her 81st birthday: 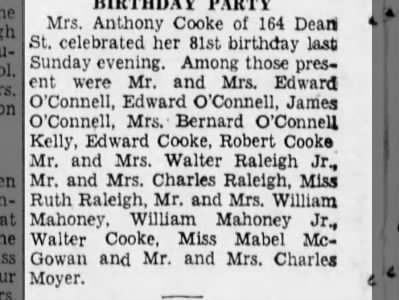 There were parties for my cousin William “Billy” J. Mahoney, Jr. (1st cousin, 2 X removed)  The first was his 21 birthday party, the second announced his return home on furlough from the army. 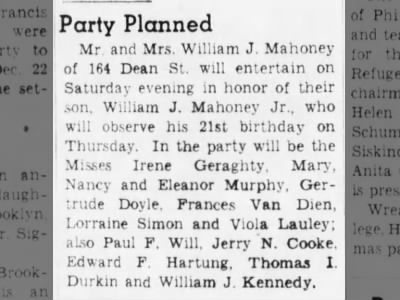 With all those “Misses” invited, I think his mother, my second great-aunt “Gertie,” may have been trying to marry Billy off in 1941.

Billy would, like so many young men during that time, join the Army.  He went to boot camp at Fort Jackson, South Carolina.  Either during a break in training or before heading over to the European theater he came home on a furlough, and his mother threw him another party. 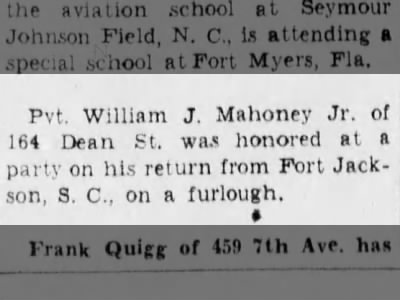 I think the second event was a lot more bittersweet than the 21st birthday celebration.  Billy would go on to fight in Europe where he was wounded in action.  He came home to Dean Street and took care of his mother.  He never did marry.

My great Uncle Ed (Edward A. O’Connell) was an interesting character.  He was a banker,  a talented artist and a bit of an amateur historian of the Fire Department in New York City.  In his study on the third floor of the brownstone on Dean Street he had painted a borough map of Brooklyn with the locations of all the fire houses, call boxes and graphics of some of the equipment.  I don’t know if any photographs of the wall were ever taken.  If there are any out there, I would love a copy.  On 24 October 1948, his work appeared in the Old Timers section of the paper.  Both the graphic and the write-up were his work.

I was originally looking for information on births and deaths. I found the life in between.

3 thoughts on “Addressing My Past”