My parents, Regina and Jerry Baumann were married on June 3,  1957. Today is their 60th wedding anniversary. They were married when he was 23, just 2 months shy of his 24th birthday, and she was 2 months past her 19th.

Monday is an odd day for a church wedding, and yet there they were at St. Saviour Church on 8th Avenue in Brooklyn, New York.  The bride was the daughter of a New York City Fireman. The groom, a young Naval Aviator, was the son of a Brooklyn, shipyard welder.  They were the products of a strong, working class, Irish Catholic upbringing in a world that had recently survived the Great Depression and World War II.  They were of the generation coming of age during the innocence of the 1950’s in the Park Slope neighborhood of Brooklyn.

The bride’s parents had great hopes for their eldest daughter, and her choice for a life partner at this age was not immediately embraced by her parents.  They finally relented and gave their blessing.   I guess if my father could land a jet on the rolling deck of an aircraft carrier at sea, he must have shown some potential.  With the blessings of both families, wedding plans were expedited, and they arrived at the church on that Monday to say their vows and start their journey together.

The marriage was officiated by Rev. William Scrill, a friend of the bride and groom from their days as CYO counselors at Coney Island. Rosemary McNulty, my mother’s best friend, was the maid of honor. Don Hayes stood up for my Dad. Donald Harper, one of my Dad’s Navy buddies, made a last-minute appearance. 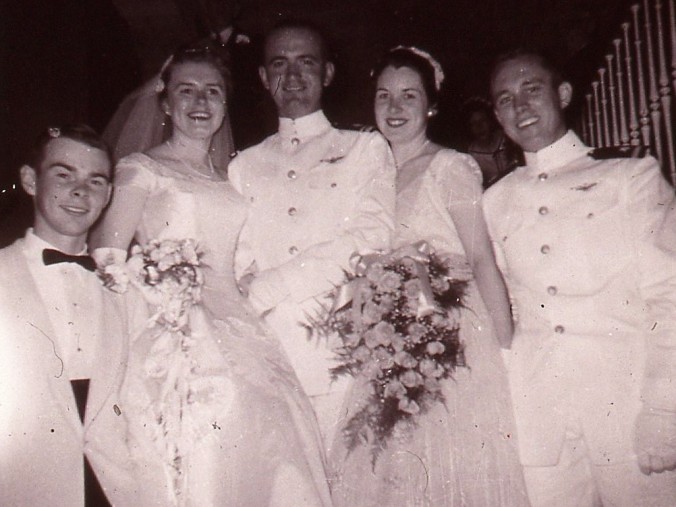 I tend to study old family photos. The one above is my favorite for a few reasons.  First of all, my mother is positively beaming.  My mother has never been comfortable with her appearance. In fact, she has always downplayed her looks. She is, unquestionably,  an American Beauty.  (Anyone who says otherwise is itching for a fight.)  My Aunt Ann, my mother’s sister, is just barely visible photo bombing over Don Harper’s shoulder.  The other story in this photo concerns the two people on the right of the group shot.  Ensign Don Harper met Rosemary McNulty for the first time on May 26, 1957, just 8 days before this photo was taken.  Introduced by the same couple that they are flanking in the photo.  Take a close look and notice that her left arm goes back to Ensign Harper’s side.  If I were a betting man, I would say that they are holding hands.  The smile on her face reveals a great deal.  Sixty years later, Don and Rosemary are still holding hands in South Carolina.

I am not going to give you some fantastic story of my parent’s perfect life together.  There are no fairy tales.  Marriage is work.  Mom and Dad had more than their share of trouble, heartache, triumph, and adventure.    Their union has produced six children, three sons, and three daughters.  All are college graduates, all have families of their own.  There are 13 grandchildren including adopted and step-grandchildren.

Through their lives together they have battled alcoholism, cancer, periods of unemployment and significant financial challenges. They sometimes battled each other.  During some very dark years, my mother held the family together by sheer force of will.   But, they came back to embrace sobriety, beat cancer, succeed in business and travel the world together.  Today they are battling my mother’s diagnosis with Alzheimer’s Disease.  They are still together, honoring the vows they shared sixty years ago today. 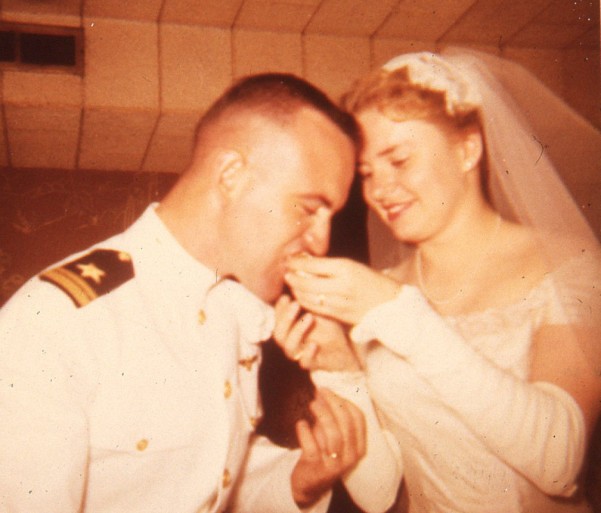 I want to congratulate my parents, Regina and Jerry, on reaching this milestone together. I wish for their continued love and happiness no matter what challenges lie ahead.  Whatever comes, I know you will get through it together.  I love you both!