The text of the email read as follows: “Don’t ask how I got to your page but I may have what you are looking for…”

Sometimes the universe surprises me.  Something incredible happens, and I have no explanation for it.  My father would call that a miracle.  I will call it serendipity.

We all have icons in our lives.  Some are more obvious than others.  Growing up in the largest of the five boroughs in New York City,  I could point to structures such as the Brooklyn Bridge, the Williamsburg Bank Building or the Cyclone as being Brooklyn icons.  But, there are more personal icons.  Those are things that may be small and significant to a neighborhood, a block, or a family.  Examples in my life included the letter “F’ on the front end of the subway train that serviced my neighborhood.  The F Train was transportation to adventure. It would take you to Manhattan and, with a change of subway line, would transport you anywhere in the city.

The Panthers at the Third Street entrance to Prospect Park guarded the approach to a different universe in my imagination away from the traffic and buzz of my neighborhood.  (They are not lions! Google it if you don’t believe me. I’ll wait.)

And then there was Fred Goat.  I have been on a mission to find a photo of Fred Goat since last October.  That tasking came from my godmother, my Aunt Anne.  This post is, in fact, my third on the subject.  The other two posts are:

To summarize, Fred Goat was a logo that adorned the side of the turret on the building at the corner of 3rd Avenue and Dean Street in Brooklyn. It was the home of the Fred Goat Company, a machinery firm.  In the 1940’s and 1950’s, my maternal grandfather would encourage his daughters to say “goodnight” to Fred Goat as they passed by on the journey from my grandmother’s family home on Dean Street to their home in  Park Slope.  The tradition continued with my siblings in the 1960’s as we made a similar journey home from the venerable old brownstone on Dean Street to our home on 4th Street near the park. As a child, I would look at that castle-like structure, and I would imagine it was ruled over by a goat named Fred. 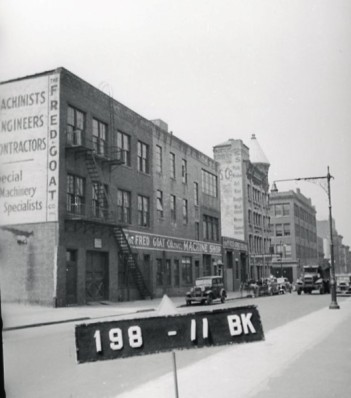 Advertisement from the Brooklyn Eagle Circa 1925

My search for a photo had yielded me various shots of the exterior of the building, but none had an angle I wanted with Fred on the side of the turret. I worked with the Brooklyn Public Library, the NYC Municipal Archives, the New York Times and other potential sources of the holy grail of Fred Goat photos.  But my efforts went unrewarded.

That is until last night. I noticed that an email had arrived in this blog’s admin account as I was working on some old family photos.  The text of the email read as follows: “Don’t ask how I got to your page but I may have what you are looking for…” I took a look at the name of the sender, and I knew the universe might be up to something.  I replied to the email hopeful that I was about to be reunited with an icon from my past.

The email was from the great, great, great granddaughter of  Fred Goat (the entrepreneur, not my mythical goat).  I don’t know how she stumbled on my blog.

Courtesy of the Goat Family

Perhaps, one of my 23 subscribers let it slip that I was looking for a photo of her family’s old business in Brooklyn.  My subscribers are, after all, a very exclusive and influential group! I would like to know how she stumbled on me, but I promised not to ask. So this is me, not asking.

Just before ten last night, another email came in with two photos attached.

Ladies, Gentleman, and exclusive and influential subscribers, I give you Fred Goat! 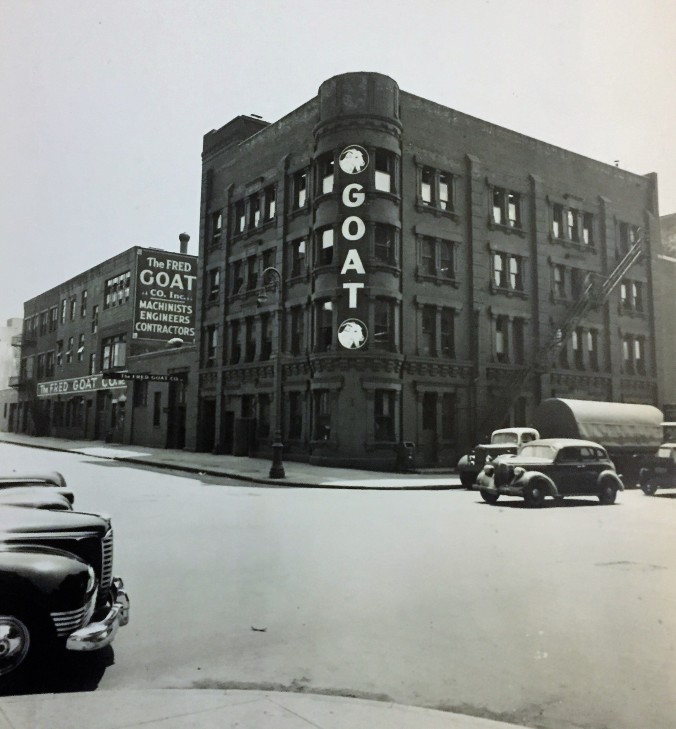 The Fred Goat Company, corner of 3rd Avenue and Dean Street.  Courtesy of the Goat Family

We all have quirky family traditions.  At least I hope and wish we all do. The real Goat family probably never knew what was being whispered from the back seat of a random Ford Country Squire station wagon to the logo on their building. That secret is out now.  Without ever knowing it, there was a connection between the families.  Of course, you didn’t know about us, and the younger members of my family thought you might be real goats.

Aunt Anne, here is your photo courtesy of the Goat Family.  I will start working on quest #2 (that is another story for another evening).

My thanks to K.G. for sending the photos along. Please know that from southern Virginia to coastal Massachusetts, my Mom, siblings, aunts, cousins and maybe some nieces and nephews are going to be saying goodnight to Fred Goat tonight.  Some are doing so for the first time.

One thought on “Serendipity, Thy Name is Goat”